April 30, 2008 I'm kidding right? One update every five and a half years? Well, okay, I've been very lax. This band promotion stuff isn't nearly as much fun as making the music. Or raising kids, which Mr. Otto and Mr. Jerfo have been engaged in.

Never the less, we still play on, and even play out, an average of once every two years. One concession to the new world of the interweb: We have a MySpace presence.

Nov 27, 2002 Okay, so I got the spiffy software. I seem to need more. Hmmm. "The Perfect is the enemy of the good" is a quote that is coming to mind. In any case, the plan is to have quite a number of CD's for sale by the time February rolls around. Here's another picture, for giggles. This is out of the series we took looking for material for an 8x10. Of course, it's already outdated: Hacksaw no longer has much in the way of hair. See Hacksaw's Bio page for the new look. 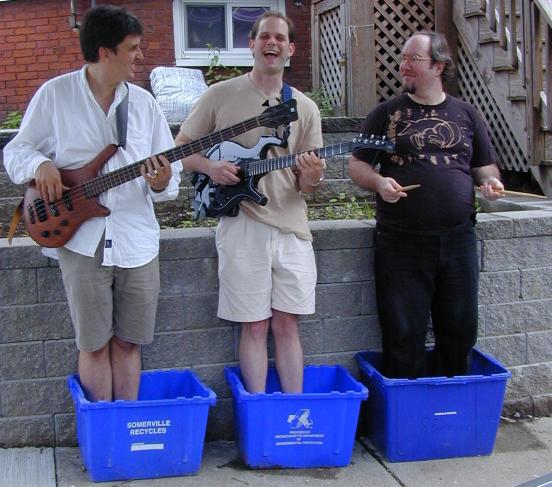 Jun 30, 2002 Oh, to have some money. Everybody's short, so there is some delay. Mastering's done, save for two songs which need to be tweaked. I need some spiffy software, and that'll be it. No really. I'll just keep saying that until we get boxes of disks back from a repro house.

In the meantime, here's a band pic to keep you amused. Note the blurred hands of the drummer. This is why drummers sweat so much. Note also the bit of blurring on the guitarists hands. He's very fast, but doesn't have to move as much. Then there's the Bass player, who appears to be waiting for the One to come around again. 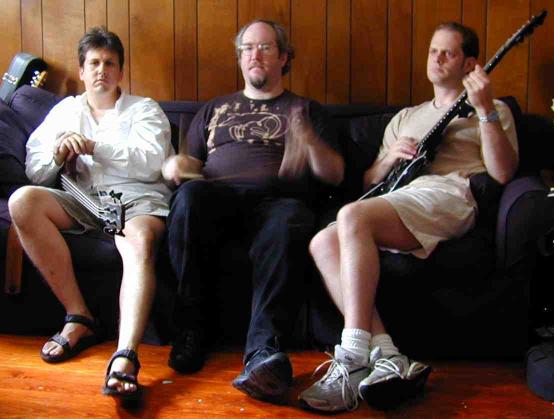 Feb 17, 2002 So, the album is finished, except for some fiddly mastering stuff, trying to get the levels up without distorting. We took some time off from thinking about it when we got to the point where we were finished mixing it, as We hadn't played in months, and needed to get back in the groove. Now we just need to package and promote it. This takes money, which we don't have at the moment. Maybe when I get a job.

Remember I said "Gig?" earlier? Well, it fell through. Sorry for those who might have hoped. The club owner was playing games with our promoter. Sigh.

Nov 28, 2001 Oooooooo, we are so close it hurts. And yet, we must record more. Jerfo's guitar turns out to be notably out of tune during part of Driving. Sigh. We press on, hoping that the thing will be done maybe by this weekend. Hopehopehopehope...

Listening to the late beta test version, everyone feels like it's a real professional sounding album. I'll try and get a few sample mp3's up here soon, so you can see if you agree. I may also list a few with MP3.com, so be on the lookout...

Nov 13, 2001 We have more tracks that we think are finished. Mr. Otto bought some new strings for his bass, and decided that it was new and different enough that he wanted to rerecord a few things. The sound is notably better. On the other hand, many of the remaining tracks require very little work. I have hopes that we can have copies of the album for sale at our gig.

"Gig?" I hear you say. Yep. We will apparently be opening for "After The Fall" a progressive band from Connecticut. This will be at a small club in Worcester, Massachusetts. (For those from out of state, Worcester is pronounced "Wuhstuh", but with a little of the "oo" as in "wookie" sound in the first "uh".

The particulars: Jan 12, 2001. We would go on at 10 or so. But come early, and spend a little money at the club to encourage them to support the Progressive Music night, and the bands themselves. 264 Park Ave, Worcester -- it's above the Thai Cha-Da restaurant

Well, I have a hard time saying just what kind of band Private Circus is. I wouldn't say we're a "rock" band. We're kind of alternative. But we're also kind of metal, but only on a few songs.

So I looked up "progressive" in the dictionary. The basic definition is:

Continuously spreading or increasing in severity.

I like it. In the end, however, it fails to accurately describe the band. Let me list a few influences that might clear it up, for those who might be reading and thinking of the gig:

"Wait!", I hear a few of you say, "What about Gentle Giant?" (The problem with writing is that I can't, after that last line, feign ignorance convincingly. Oh, well.) Mr. Jerfo actually produced a tribute version of "Pantagruel's Nativity" for Giant Tracks, a Gentle Giant Tribute album. You might be able to get a copy via Mr. Jerfo, have a look at his site www.jerfo.com.

So, no lack of gigantism there. Oh, and Hacksaw is also a fan.

Oct 3, 2001: We have a few tracks we think are finished, YAY!! More to come. The process is long, due to the pickiness of all involved, especially Mr. Berklee Music Production and Engineering Grad, and also due to the fact that he has the least time.

I started and finished work on a song called Slates, made entirely from bit of the recorded material we had. Some semi-official liner notes:

Slates started as a silly suggestion: make a song out of the "slates" from each of the other songs. A slate comes from the movies, where they marked the scene number and other identifiers on a slate chalkboard with a clapper on the top, the thing with the black and white stripes. It provides the sound department a visual cue so they can synchronize the sound to the action. In our case, we needed a common sound across all tracks so that when we pulled it into Pro Tools, two channels at a time (all I could afford), we'd have a sync cue.

Well, with three of us in the room, things were bound to get silly. It started with the djembe stroke. Then Jerfo tried to get the pager to make noise at the right time. Then the Donald Duck going berzerk impression from Otto.

But there's only so many things you can do in the 5 seconds or so per song. It wasn't a lot of sound bites. On the other hand we did have nine whole songs recorded. And one of them is kind of silly (Just Out yesterday) and another is extremely silly (Private Circus). Naturally I expanded my mandate at that point.

Then, while playing around with it, Sebbo came to visit, so I played it for him. He found it interesting, but wanting.

I agreed. It wanted a story. So I wrote some lyrics. Quick, simple, and to the point. I started with the title, Slates. The first thing that popped into my head was "clean slate". It went from there.

Slates is the only song to be produced in the mixing booth, so to speak. The only recording I did for it was the lyric track. All other songs on the forthcoming album have very little post-production, though a couple do have bonus bits, like Welcome to My World and possibly Driving.

August 28, 2001: Many tracks have a preliminary mix. I love Pro Tools. Just to make things more of a challenge, my Mac went insane, so I had to reinstall the OS. I got Pro Tools up and running again, and then my mixer went insane. I can't reinstall it's OS, so off to Tascam it goes, check the stick, kick the tires, and make it so channels 13 and 14 will stop acting as if they were siamese twins. And could I route sound out digital channel A again? Aaaarrrrrggghhhh!

I am very happy with the music. It is much fun. I hope that by the end of September, we are totally finished, and can start selling this sucker.

July 26, 2001: Most tracks are layed out now. There are a couple of vocal tracks to touch up, and the song "If I" kinda sucked, so that's a do over. Other than that we have a lot of good material to take to a final mix down. I'm pretty happy. The name of the album is likely to be Drive, Sparky.

Jun 2001: We now have 10 drum tracks down, a number with matching bass tracks. We had a bit of a step backwards, when Hacksaw made another purchase: Oktava MK-319's. These are large diaphram condenser mics with a very nice sound. Using them as overheads gave an extra dimension to the drum sounds, and Mr. Otto will use one for the vocals.

We have also made a pact to not purchase anything else until the album is done.

Apr 2001: Still working on recording. Hacksaw just got spiffy new drums (dw custom), and the sonic quality is fairly different. We have decided to go back and redo the drum tracks.

We are on the look out for an agent of some sort. We suck as salesmen, so we figure it's worth it to give someone else a cut, and let them do it. For those seeking to book us, or those who would to be our agent, please send mail to booking: booking@privatecircus.com

Feb 2001: Still working on the recordings. A few guitar tracks have been laid down. Jerfo got laid off, and then found a better job. A nice bit of raise, and a company that is likely to be around in a few years.